On Tuesday Sam showed off his deck building skills, with his take on an undated Aristocrats style brew for the new Dominaria Standard session. The back bone of his deck revolved around one of Magics favourite token creatures, Saporlings, and aims to use these fungal 1/1’s to help cast larger threats to close out the game. I also have been brewing with Saporlings, but unlike my colleague I have a slightly different plan to win my games.

You see, back during Shadow of Innistrad Standard my deck of choice was Green/White Tokens. A deck that could over run the board with an army of pumped up creatures that was also resilient to removal and sweepers, the deck was one of my favourite from the last couple of years. It was also very successful, getting me a Grand Prix Trail win at GP Manchester and many other victories during its lifespan. However, with the release of Dominaria I believe that this deck is due for a revival, and Saporling are going to help us achieve this.

The base of the deck is very similar to Sam’s brew, with cards like Spore Swarm, Tendershoot Dryad and Song of Freyalise all making the cut. We also include playsets of Saproling Migration to maximise Saporling production, as well as Sporecrown Thallid to work as the first of our anthem effects. On their own these cards provide us with a solid core of a Saporling tribal deck. But with a splash of white mana, things get very interesting. 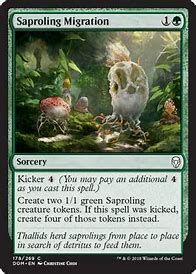 First off, we get to add the token multiplier Anointed Procession. Once a jank rare that was seen only as a Commander card by many, it has proven itself as a solid Standard stable for anyone wanting to generate an army out of nowhere. Additionally, we include a playset of Radiant Destiny for a second anthem effect. It is extremely easy to attain the City’s Blessing with this deck, so often our Saporling will be able to attack and defend thanks to been granted vigilance. We also get to play with Wizards latest Selesnya angel, Shalai, Voice of Plenty. Been able to protect our team from removal and ourselves from direct damage and hand attack is great, but she is also a fantastic mana sink in the late game as we pump up our small force of tokens to become a real threat.

White also grants us some top-notch removal thanks to it’s many exiling Enchantments. For our deck we will be running two copies of Baffling End and Thopter Arrest. Baffling End is useful not only to get rid of early threats, but also as a way of removing pesky blockers when we are ready to swing in for the win. Thopter Arrest handles anything else that Baffling End cannot deal with, but if your local meta is more control based then you could swap them out for Cast Out if you so wish. Our final non-creature spell is a playset of Blossoming Defense to protect our key pieces from targeted removal.

Our mana base is pretty straight forward since we are only in two colours, with playsets of Sunpetal Grove and Scattered Groves working as our dual lands to go along with some basics. We also run some deserts in the form of Scavenger Grounds and Shefet Dunes to battle recursion strategies and pump the team respectively. Our sideboard is fairly solid, able to handle most match ups. Aethersphere Harvester helps us fight off aggro decks, while Cast Out and Ixalan’s Binding provide more solid removal. Broken Bond handles Artifacts or Enchantments while giving us some mana acceleration, and Fungal Plots gives us more graveyard hate. Heroic Intervention protects our board from most wraths in the format, while Settle the Wreckage can be a life saver if we somehow fall behind in a race.

And that everyone is Green/White Tokens for Dominaria Standard. In the small amount of testing I have done online I have found the deck to be very strong, able to hang with the top tier decks of last season. I am so impressed with the deck I am really considering taking it to GP Birmingham and throwing it into the main event. But what do you all think of it? Is this the kind of deck you would want to play? Or have you something else you want to run in this bold new format? Why not let us know in the comments below, and while you are there why not subscribe to the site to keep up to date with all the latest from us here at Master of Magics.

Dominaria seems to have breathed new life Standard, and I am so excited to see what other new decks will turn up over the coming weeks. I’m also super jazzed about GP Birmingham. Many of us from Master of Magics will be joining other content creators from the UKMTG community for a huge four days’ worth of Magic fuelled goodness. We might also be doing some ‘special’ activities over the long weekend, so keep your eyes peeled for info on that. But until next time remember, Good Luck and Have Fun.