With this being my first article on Master of Magics I guess a brief introduction is in order. Some of you might recognize me from Vincent Chandler’s  videos (otherwise known as Pleasant Kenobi on the internet). He’s the UK number 1 if you didn’t know.

My name is Alex and I play Death and Taxes. I play it in every format I can, and I’ve probably tried every variant you can come up with at some point over the last five years. Vince and I often don’t see eye to eye with our builds or approaches but one thing we agree on is our (unhealthy?) love for the deck. 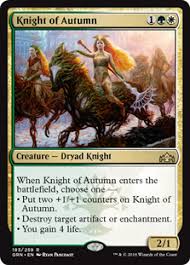 We recently returned to Ravnica (again) and with the new set comes a new season. It’s fall on Ravnica, or autumn if you’re like me and from the UK. So with that in mind I’d like to introduce the latest flavour of death and taxes for the modern format – Autumn Taxes, a deck I feel is very well positioned if you prefer to fall on the ‘fair’ spectrum in the crazy format that is modern. Knight of Autumn is the new hotness from guilds of Ravnica and injects new life into an archetype that hasn’t seen much success or love recently. Here’s a version of the deck taking advantage of the Dryad Knight:

Previously I played some combination of Eternal Witness and Qasali Pridemage in the maindeck flex slots, but here I’ve replaced them with the full four copies of Knight of Autumn. Modern is a constantly changing format and that requires us to be flexible, something which the Knight allows us to do really well. Its a key part of the maindeck, being a solid answer to cards like Hardened Scales, Hollow One, and Krark-Clan Ironworks whilst still being good vs burn as a way to keep our life total high. Its not too shabby against more controlling decks either, coming down as a 4/3 when we need it and destroying the occasional Search for Azcanta.

The knight is almost never a dead card. I didn’t think having access to maindeck Lone Missionary would be that big of a deal, but during testing flickering the knight to gain life during a race really gave me an edge, allowing me to safely finish off my opponent with flyers. Modern is fast and efficient, and those four points of life can really matter in a lot of situations. The Knight also allows us be a little more liberal with our mana base, letting us run a full playset of Horizon Canopy without having to worry about paying life when tapping it for mana.

The power of Knight of Autumn can really be leveraged in this deck with 7 ways to flicker our creatures. With such a low curve and the aggressiveness with which we use our utility lands (Ghost Quarter and Horizon Canopy), the jury is still out on running the fourth copy of Restoration Angel. I have also played Shalai, Voice of Plenty in the maindeck with some success, however dredge is currently dominating the mtgo meta and so we’ve moved up to four copies of Scavenging Ooze. Flickering Knight of Autumn has lead to backbreaking game one’s against several decks that were previously a struggle for older green and taxes builds.

Black/White eldrazi taxes has started to become the default for Death and Taxes variants in modern. Unlike this variant, we get access to some of the best cards in modern right now, as well as a much cleaner mana base. Something that always put me off of BW was the lack of fixing in what is essentially a three-colour manabase (Black, White, and Colourless) which wants to cast Tidehollow Sculler and Flickerwisp.

In our list, we still have access to the usual incredible white cards, Thalia, Guardian of Thraben; Rest in Peace; Flickerwisp; and Stony Silence, but between Knight of Autumn, Noble Hierarch, Gaddock Teeg, and Horizon Canopy there’s a big incentive to join the Selesnya Conclave. Typically we want to lead on Aether Vial, but we can sometimes get the ‘nut draw’ which allows us to play Noble Hierarch into Leonin Arbiter and Ghost Quarter, destroying one of our opponent’s lands on turn 2. In games like that it’s easy to forget that Death and Taxes is widely considered a fair deck.

Notably, both dredge and BG/x decks have been picking up in popularity recently (due to them both receiving new toys in Assassin’s Trophy and Creeping Chill). Having access to multiple copies of Scavenging Ooze really helps in these matchups, and the four maindeck slots given to it are especially important with these decks on the rise.
Another advantage of having such a flexible maindeck card like Knight of Autumn is how much sideboard space it frees up. The sideboard above is geared towards what I’m currently running into on Magic Online. One of the important parts of being a successful Death and Taxes player is being able to remain flexible and bring what the expected metagame calls for.

Which leads me on to my sideboard choices. We’re already reasonably favoured against a lot of the combo decks thanks to Thalia and our mana denial package, and so only a few slots of our sideboard are dedicated to these matchups, with the others devoted to the other fair decks in the format. Gaddock Teeg plays an important role against combo and control decks, being able to stop Cryptic Command, Terminus, and planeswalkers from UW and Tron as well as stopping cards Like Ad Nauseum and Krark-Clan Ironworks from being cast. While there is definitely some debate about running copies of the Kithkin in the maindeck, I’m happy with keeping him in the board for now.

Sword of Light and Shadow. I recently posted on twitter trying to figure out what I wanted in this slot. Traditionally, I’ve been playing Gideon, Ally of Zendikar here which, whilst still being an incredible card, doesn’t work well with Thalia or Teeg in play. Paying the extra 1 mana when Thalia is on the battlefield when we’re constantly sacrificing our lands is not something I’m too interested in right now, and the planeswalker is uncastable with Teeg on the field. Gideon was always a haymaker vs BG/x decks, but with Assassin’s Trophy being such a clean and widely-played answer other cards are simply more suitable.

Ramunap Excavator may look a little out of place, but it is great in more grindy matchups, allowing us to recycle both Ghost Quarter and Horizon Canopy which is huge vs UW and BGx decks. Rest in Peace and Stony Silence are two of the best reasons to be playing white in modern, so of course we’re running them here. Don’t leave home without them, and when the time is right don’t be afraid to play extra copies if you think they’ll be useful. Until recently I had a copy of Linvala, Keeper of Silence in the sideboard. The Collected Company decks that she is typically good against are not being played online much right now, with the premier company deck right now being Bant Spirits, a matchup in which Linvala doesn’t do enough (if anything.)

So with this change of season I bid farewell to Reclamation Sage, my dear old friend. You will indeed be missed, but for now I’m excited to be casting Knight of Autumn in as many modern games as possible. Let me know on twitter if you’re playing Autumn Taxes or if you have any questions about the deck @jetpack_blues and make sure to follow Master of Magics on their social media pages too.