Last weekend was an exciting weekend for Standard players as almost 2600 players descended upon Lille (1339) and New Jersey (1212) to battle at the new standard format. I headed over to Lille with a handful of friends to try my hand at new Standard and continue my testing for Pro Tour Guilds of Ravnica.

My preparation for the event started around 3 weeks before the GP where I was trying as many different decks as i could find to try and get a feel for the power level of all the different cards. In my last article I stated that I thought that Steel Leaf Stompy would be a good week one deck and that was the place that I started. I tried lots of different versions of the deck but kept falling short, specifically against Lyra Dawnbringer out of the Boros Angels decks because it is a difficult creature to fight past in combat. I wanted to try and find a deck that was good against the Boros Angels deck and could have a good match-up against the other decks that were emerging in the meta.

Shortly after there were 2 Magic Online PTQs which were dominated by Golgari Midrange decks with the winners both choosing to play with the powerful Black and Green cards. At this point I left other ideas behind and decided to work on finding a good Golgari Midrange list for the GP, with David Calf from Team Axion Now, and seeing how standard developed in the week before the GP.

The online meta continued to develop towards Golgari which meant that we could focus on trying to find a good list for the mirror. Unfortunately we could only come to the same ideas that the online meta could in that Vraska, Relic Seeker was not as powerful as Carnage Tyrant in the mirror and the dinosaur was the way to go to try and win it.

This is the list i eventually decided to submit for the GP: 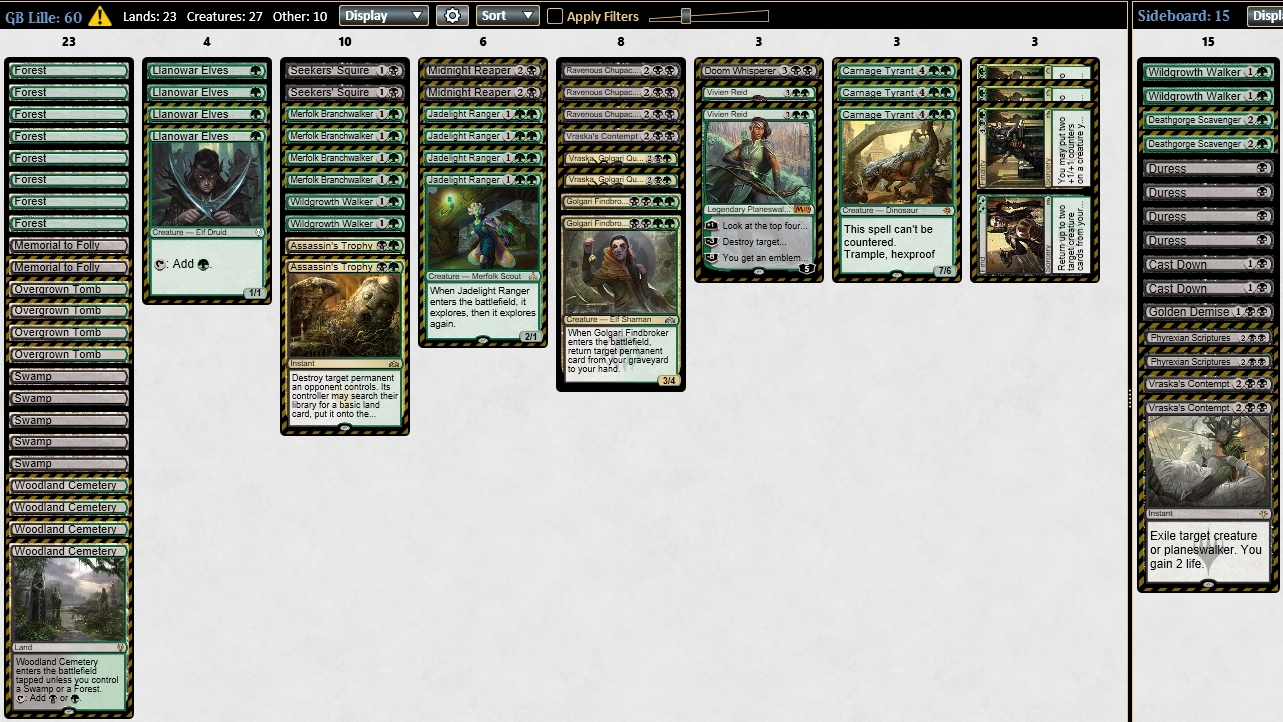 The deck felt good throughout the weekend and excelled at what we wanted it to do which was win the Golgari mirror. Between David and I we had a record of 11-5 in the mirror with David finishing 11-4 on the weekend and myself finishing 9-6.

The main card that I wanted to talk about comes from the sideboard and are the 2 copies of Phyrexian Scriptures that we wanted to play to combat the midrange decks, specifically the Carnage Tyrant mirrors. The card was wildly polarising for me over the weekend as it is a very powerful effect to keep your Carnage Tyrant alive while simultaneously destroying theirs and then exiling their graveyard to disrupt and recursion for the dino, the problem however is that it dies very easily to opposing Vivien Reids along with Vraska, Relic Seeker. It is possible that for this reason the card will see little to no play as an answer to Carnage Tyrant.

The tournament started smoothly after my two byes with me picking up wins in rounds 3 and 4 against Dimir Control and a Golgari Midrange mirror respectively.

In Round 5 i played against a friend in Alexandre Habert in another Golgari mirror, but I felt unfavoured this time around as Alex was on a more top heavy version with 3 Doom Whisperer, 2 Carnage Tyrants and 7 Planeswalkers backed up with some additional ramp in the way of 2 Druid of the Cowl. Game 1 was a close game but game 2 was decided by a turn 4 Carnage Tyrant, showing the power of the additional mana-creatures.

Rounds 6 and 7 were 2 more Golgari mirrors where i was able to pick up 1 more win to put me at 5-2 and ready to play round 8 for my spot in day 2 of competition.

Round 8 was against a Jeskai Drakes decks which i didn’t feel like my deck was very well prepared to deal with. This was another match-up however, to show the reason why you can get away with playing so many Carnage Tyrants as my opponent struggled to remove the 7/6 and quickly fell to it in game 1. Game 2 was decided by a 20 power Crackling Drake going at Maximum Velocity to steal a game I felt certain to win. Game 3 has me open with Merfolk Branchwalker into Midnight Reaper to put a lot of pressure on my opponent and trade a lot of resources early. While they were casting draw spells and removal spells to set up their game plan, i cast a turn 6 Carnage Tyrant and my opponent found themselves at 9 after being hit by it once and facing down the tyrant along with a 2/1 Jadelight Ranger. My opponent played their 6th land and passed the turn which sparked the idea that they are holding a Settle the Wreckage to try to deal with my Carnage Tyrant if were to go for a lethal attack the following turn. My hand wasn’t set up well to win the game if my Carnage Tyrant were to be exiled as my only spell remaining was a Find//Finality so i decided to play around the powerful instant and was rewarded when my Jadelight and following Branchwalker were swept away leaving the way for my Tyrant to get the job done and let me play in Day 2.

After grabbing food with some friends and headed to bed early so that i felt good going into day 2.

I started off day 2 by winning round 9 against Jeskai Control before lost round 10 to eventual champion Etienne Busson on Mono Red, knocking me out of contention for the top 8. I mentally reset myself before taking down another mirror in Round 11 leaving me sat at 8-3 and very much in contention for some needed Pro Points. Round 12 was the longest and most difficult Golgari Mirror that I played and it came down to the flaw in Phyrexian Scriptures costing me the match as my opponent looped Vivien Reids with a number of Golgari Findbrokers and my scripture was never able to clear the board and a path to victory.

Round 13 was the first round that I played against Izzet Phoenix and had some unfortunate mulligans to lose this round but in Round 14 I found myself on the other side of fortune and my opponent failed to play more than 2 lands in either game.

This set me up the be 9-5 going into round 15 and playing for the all important Pro Point and i was paired against fellow UK player and Magic Online grinder Ben Jones (__BMJ__) who i knew was on a Golgari list aimed at consistently playing Carnage Tyrant before the opponent by choosing to play Elvish Rejuvenator. The match was uneventful as all three games were very one-sided and unfortunately not in my favour.

Unfortunately I finished 9-6 and gained no Pro Points from this GP in my quest to get Silver.

I am still looking forward to playing more competitive Magic as i fly this week to Atlanta to play in the GP and following Pro Tour. I am 50/50 between tron and humans on what to play for Modern at the GP and am leaning towards my Liberated roots. 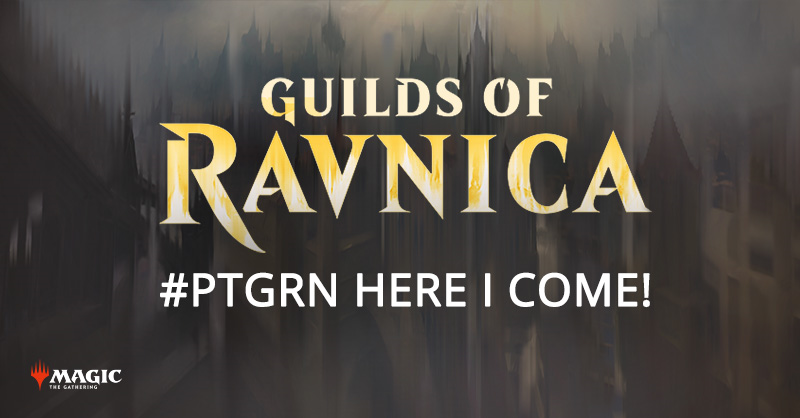 I look forward to exploring this standard format some more and am excited to play in my second ever Pro Tour.

What would you play in modern if you were playing in Atlanta?

You can find me at almost every European GP and also on Twitter at @MattBrown_MTG.

Thanks for reading and good luck at your next event!